Everything you need to know about living in Barcelona

Sun and a privileged coastline that stretches around it, from north to south. The mountains, both overlooking the city itself, as well as sprouting with different heights and shapes throughout the province. History, culture and architecture as characteristic as it is peculiar. Leisure by day and by night, Mediterranean and international cuisine being cooked in some of the best restaurants in the world... There are many advantages to living in Barcelona. living in BarcelonaCan you see yourself moving there? With these guidelines we are sure to help you decide whether you should live in this beautiful city.

What it takes to live in Barcelona

Desire and money. These are the two main things you need to live in Barcelona and anywhere else in the world. Without a roof over your head and a place to live, you won't be able to settle anywhere. And without the desire to enjoy and get to know the city, you won't be able to either. In this regard, you should know that it is a city in which, despite not having high salaries or a wide range of jobs compared to other places in Europe, it is the second city in the country. In addition, sectors such as the and tourism do tend to generate jobs, as well as the growing technology sector, which is making a name for itself in the Catalan capital.

Apart from that, Barcelona can be the place for you if you are a nature and sports lover, as it has the right places for that. It is also an ideal place for those who love the climate and Mediterranean cuisineas well as the typical lifestyle. The weather is inviting and so is the gastronomic and socio-cultural offer. Nevertheless, although it is a Spanish and Mediterranean city, in certain aspects it has a very marked character due to tourism and the many foreigners who already live here.

As we have already mentioned, the climate, the wide range of social and cultural activities on offer and the environment are the main advantages of living in Barcelona. It is also well connected to other parts of Spain, Europe and the world thanks to its good communications network. In fact, it offers excellent connections by land, sea and air. At the same time, for a foreigner, the prices are not excessively high, unless you are looking for a flat or a house in the best neighbourhoods of Barcelona to live in. best neighbourhoods in Barcelona to live in.

But how much money is needed?

As you can see, the most basic expenses for living in Barcelona are no small matter. In other words, if you are thinking about how to move to Barcelona and live there without suffering financial hardship, you need, first of all, a good salary. A salary that can be around 1,200 € net, since part of that salary will be spent on:

If you take a calculator and add it all up, you will see that it is expensive to live in Barcelona. All these basic monthly expenses are around 800 €. And that's not counting the money you'd like to spend on savings, investment or leisure. Because since you live in a place like this, how can you not take advantage of the opportunity to go to a restaurant with music in Barcelona, to one of its cinemas or to have a drink and dance in one of its many nightclubs?

Perhaps the high cost of day-to-day life is the worst thing about the Catalan city. That or the growing insecurity that has been generated in recent times. The truth is that in recent years there has been an increase in crime in Barcelona and the surrounding area. El Prat, a municipality very close to where the airport is located, and Barcelona itself are the two Spanish cities with the highest crime rates per thousand inhabitants in 2020. This is according to data from the Ministry of the Interior itself.

Drugs and robberies are the main crimes being reported in the Catalan capital. Many of them take place in central areas, taking advantage of the influx of people and tourists. And along these lines, if you want to know Barcelona's problem neighbourhoods where it is not advisable to live, here are four of them:

However, although there are certain risks, as in any other part of the world, Barcelona could not be classified as an unsafe city. In fact, it is still one of the most visited cities in Europe and also one of Spain's main economic engines. one of Spain's main economic engines. Therefore, if you want to live in the Catalan capital, for whatever reason, we encourage you to plan your finances and take the plunge without fear. We will help you decide where to live in Barcelona in the safest and most comfortable way. 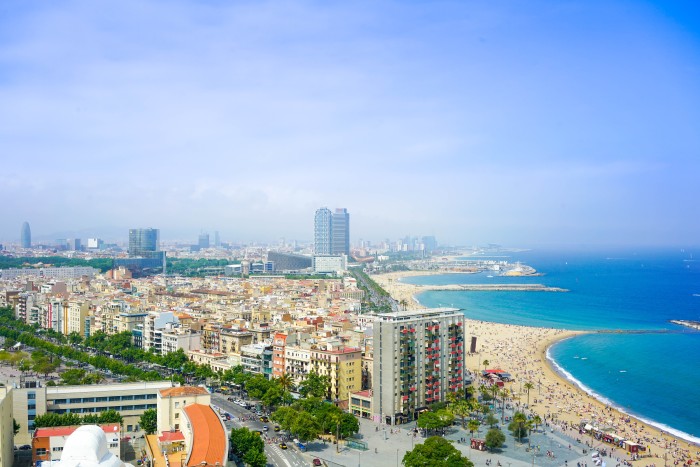 And, in case you are looking for a good flat or house, to buy or to rent, we can help you to buy or rent, let yourself be advised by specialists and connoisseurs of the real estate market of this wonderful city as Trion Finance, will help you. So, if you have the money and the desire, get in touch with us to start your new adventure.

These terms and conditions govern our relationship with the website trionfinance.es, operated by Trion Finance & Consulting S.L. Please read carefully the following terms and conditions before using the service. Your access to the service and its use is conditioned by your acceptance and compliance with the following terms, applicable to all visitors, users and anyone else to access or use the service. By accessing or using the service, you are legally bound to comply with these terms. If you do not agree with any of its parts, we advise you not to access the Service.

The service and its original content, features and functionalities are and will continue being the exclusive property of Trion Finance & Consulting S.L. and the holders of the license. The service is protected by intellectual property rights, brand registered and by other regulations, both in Spain and in foreign countries. Our trademarks and distinctive signs may not be used on other goods or services without first obtaining the express written authorization of Trion Finance & Consulting S.L..

Links to other websites

There is a possibility that we will make a decision to prevent or suspend your access to immediately and for any reason (including, but not limited to, violation of these terms), without need for prior notification and without assuming responsibility of any kind. After closure, your right to access the service will be immediately suspended.

Neither Trion Finance & Consulting S.L. nor its directors, employees, partners, agents, distributors or affiliates will be liable, under no circumstances, for any damages indirect, accidental, special, causal or punitive, including the loss of profits, information, profit, benevolence and other intangible losses that have been caused by (i) your access, use or inability to access or use the service; (ii) any behavior or content contributed by a third party to the Service; (iii) any content obtained from the service; and (iv) unauthorized access to, use or modification of its broadcasts or contents, even if they are supported by a guarantee, contract, tort (including negligence) or any other legal theory, and regardless of whether they are whether or not you have reported the possibility of such damage, even if it is demonstrates that the remedies provided in advance here have not achieved their goal main.

Your use of the service is at your own risk. The service is provided as is/are available, and without warranties of any kind, either express or implied warranties, including, but not limited to, the implied warranties of merchantability, suitability for a particular purpose, non-infringement or course of performance Trion Finance & Consulting S.L., its subsidiaries, affiliates and licensors do not warrant that a) the service is to operate uninterruptedly and safely, or to be available at any time and from any location; (b) that their errors or (c) the service is free of viruses or other harmful components; or The results of using the service will meet your expectations.

These terms shall be governed by and construed in accordance with the laws of Spain without regard to counts the conflict with its legal provisions. Our failure to enforce any right or provision in these terms shall not be deemed to be an exemption from such duties. If any provision of these terms is invalid or cannot be enforced by a court, the remaining provisions of these terms will remain in force. These terms constitute the entire agreement in service we offer, and therefore replace any previous agreement in relationship with the service.

We reserve the right to modify or replace these terms at any time and according to our own criteria. If there is a material revision, we will make an effort reasonable by giving at least 30 days' notice before the entry into force of the new terms. We will determine what constitutes a material modification by following our criteria. By continuing to access or use our service after those changes have In effect, you are agreeing to abide by the revised terms. If you do not agree with the new terms, either in part or in full, we ask you to stop using the website and service.

The result of this simulation is indicative and is therefore not a contract offer. The data indicated corresponds to the average of the operations signed in the last 3 months, but in no case does it imply any commitment, obligation, nor will the decisions you may take be the responsibility of TRION FINANCE & CONSULTING. This simulation is calculated with an interest rate of 1%. The final contracting of the mortgage must be approved by the bank.